Holistic Knowledge is the knowledge of WHY you do something.

Quantifying the amount of holistic knowledge your game requires is not the same thing as quantifying the number of StrategiesA filtered set of mechanics that either provide an advantage to a player, or limits the advantages of the player's opponents. that your players can employ.

One of the better examples of the application of Holistic Knowledge is a fighting game. I'm going to use Street Fighter 4 as an example because I played it a lot, and I'm familiar with it, but you could just as easily study this in other games with which you are more familiar.

I spent a long time in Street Fighter 4 trying (and failing) to master Dhalsim, particularly because he exemplifies the fun of asking Why. Thanks to his stretchy limbs he has a lot of weird moves, and you cannot help but watch them and wonder where in the hell you would use them, but that’s what makes him fun. 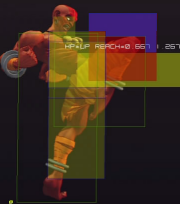 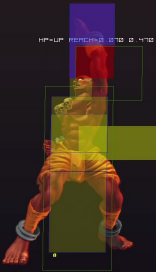 Take anti-air. Dhalsims Back + HK is a fantastic anti-air, one of the best really, and it works / punishes a great deal of jump ins. Now, one might look at his Back + MP, another anti-air, and think, “why the hell would I ever use this?”

But, for certain situations, especially when someone goes for a cross-up, it is the superior choice. One of these (b.HK) is arguably more useful than the other, and if Dhalsim had to have one less move in his arsenal, you could make a good case for cutting the other, but I can’t imagine the game without it.

The following diagram lists, around the circle, all of the possible actions that Ryu can perform when standing idle. By clicking on any of the moves it will then show you all of the moves that can be chained through Combo CancelsA series of attacks that are done by by canceling your current animation and starting to play a second animation.. How deeply you traverse in this showcases the quantity of Mechanical Knowledge required, while the number of options available at each stage showcases the Holistic Knowledge required.

Some interesting terminology I should discuss: Combo LinksWhen the sequence of attacks from your Combo is due to Frame Advantage. The difference between this and a Combo Cancel is that your animation completely finishes before going to the next attack in the sequence. vs Canceling. This is showing Cancels. It is not showing Links.

To understand the difference between Links and Cancels you must understand the frames that make up a move. A Link is when, after hitting your opponent with a move, you can hit them again with a second move because the new move's Startup FramesThe Frames of your attack animation where the collision spheres or other methods of determining damage have not activated yet. Also called 'Windup'. is less than your opponents Hit Stun FramesThe Frames of your hit reaction animation, where you are prevented from inputing any moves. You are almost never allowed to to cancel or end this portion of an animation early, hence 'Stun' (you have what is called Frame AdvantageWhen the Hit Stun Frames of your opponent are longer than the sum of the remaining Hit Frames and Recovery Frames of your current move, and the Startup Frames of your next move. Often easier to pull off through Combo Cancelling, as you will not have Recovery Frames.). 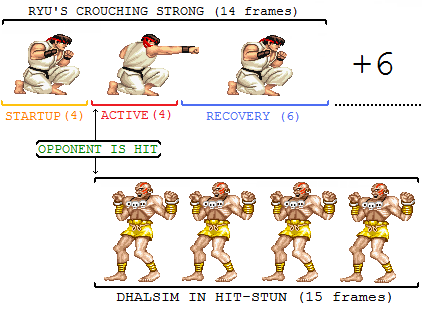 Now, let's compare and contrast that example same diagram with a different character for a different type of game, God of War: Ghost of Sparta. I find this to be a great comparison case because, to outside perspectives, an action adventure game and a fighting game share many similarities. However, the goal of their combat systems is very different, and you see that expressed very clearly in these diagrams.

Your character in an action adventure game requires only the moves that get the job done in the coolest way possible. You rarely want your player asking the question, “Why do I have this move?” Your player has no one to play mind games with, and no one should be playing mind games with them, so there is rarely, if ever, a reason to be asking “why”. It is perfectly valid, and preferable, to have a low amount of Holistic Knowledge.